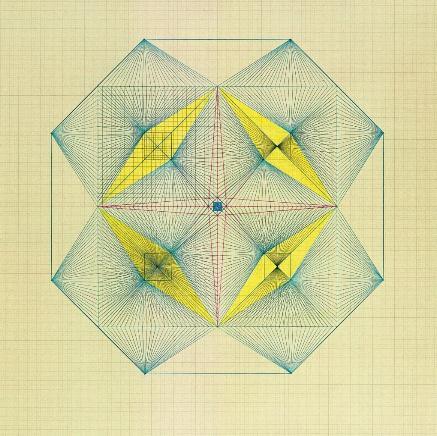 With this being the first display of Emma Kunz (1892-1963) in the UK, I was initially unsure of what to expect. Born in Switzerland, Kunz had never received a formal art education as well as never having exhibited in her lifetime. She primarily considered herself a healer and researcher of nature, however now she is thought to be a prolific pioneer of spiritual art.
Initially her collection appears to be a technical demonstration of spirographs and abstract structured patterns, with little meaning behind each one. It was quite the opposite. A popular style in computer graphics, it was interesting to observe a stark contrast in comparison. Learning about Emma Kunz’s spiritual and artistic techniques through this exhibition was fascinating, and one I have not experienced before.

In 1938 she began making large pendulum assisted drawings before the outbreak of the second World War. Forty-six at the time, she had previously been practising as a naturopath after discovering her gifts for telepathy, prophecy and healing from an early age. Researching the restorative energies of plants and minerals was her dominating objective, thus leading her to draw, discovering deeper meaning of the natural world around us. Working in rural Switzerland, she would ask the pendulum for answers on world affairs as well as observations of nature and cosmos in macro forms.

Kunz was known for continuously working on her pendulum drawings for long periods of up to 24 hours. Radiesthesia was the technique she used, involving asking her pendulum a question, and discovering the answers by recording the movements, pauses and swings on her graph paper. I’ve never heard of this technique before now, but since discovering this, the intricate drawings hold so much meaning that was originally unclear.

Christodoulos Panayiotou, is an artist uncovering and exploring political and historical records throughout time. His in-depth research and visual fascination echoes those of Kunz, creating an exhibition to embody the spiritual discoveries to the viewers.
In 1942, Kunz discovered a healing stone at the Roman quarry in Würenlos. Naming it ‘AION A’ meaning ‘without limitation’, She would use this to recharge her body and soul. Now the stone is still used for healing mineral remedies in Switzerland for pharmacies.
Panayiotou created benches from this stone, where viewers are able to sit a certain distance away from the drawing, central in the room to reflect Kunz’ practice of ‘recharging like a battery’. 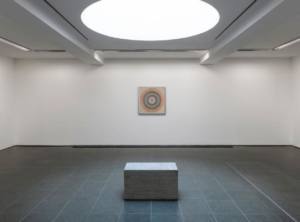 The exhibition begins in an open space with only a few drawings. The room is dimly lit as we are subtly being introduced to each one. Often refusing to give namesor record what each drawing symbolised, it’s easy to be confused on why these drawings were created. Appearing very architectural, they seem to hold a very technical process of consistent measuring, symmetry and straight line. Although the drawings are very precise, I noticed that the finish wasn’t perfected. Kunz often used faded primary colours, but this could have been due to their creation date. She also liked to compliment the colours between opposing patterns.

My favourite room consisted of a large collection of her drawings. You could see the comparison of how different each drawing was, representing a varied answer to each question asked. They were colourful, meaningful and varied. Once you learnt of Kunz technique, the collection was both impressive and overwhelming. 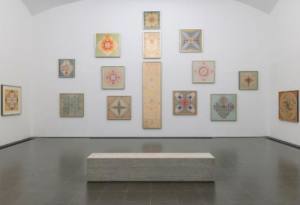 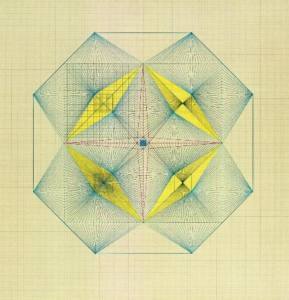 One of my favourite drawings was Work no. 117. It was striking with different components, initially appearing symmetrical, it didn’t feel overcrowded unlike some of her work with heavily dense and consistent line. It was open, spatially aware and pleasant to look at. Colours of yellow and blue were bright although slightly muted by the darker illusional lines layering on top. Overall, it was striking; I couldn’t believe how complex the linear work was considering it was a drawing. I began to feel like I had judged this exhibition too soon, as I continued through, each one had a similar level of complexity.

Work No. 020 is striking for its deeper meaning. A radius of dense line to create a gradient of thickness, red dominates the entire radius with a sky blue surrounding. Although most of Kunz’ work is undated, it is known that this drawing was created in 1939. Kunz was so alarmed by the prediction of this drawing that she called a friend about her discovery, interrupting her process. It was a prediction that America were creating a weapon that was capable of destroying the world. This prediction came true. Six years later, America catastrophically detonated Japan with atomic bombs. 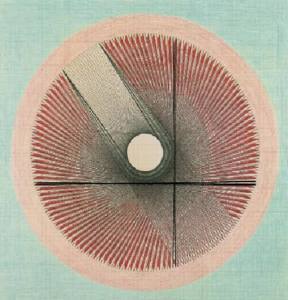 With no context behind the artist or drawings, I found it hard to understand the work and enjoy it despite being able to heavily appreciate the precise nature and techniques used. However, once learning how incredibly complex and spiritual these drawings are, they take on a whole other fascinating persona. It was really interesting to learn about Emma Kunz, and despite not being an officially trained ‘artist’ her discoveries and creations can be understood, appreciated and recognised for years to come.